It’s freezing out here. This morning’s chill is not the day for being curious, even though I can find so many things to imagine and wonder about at the river.

Two chickens are awake in Fair Oaks Village calling “Good Morning” to anyone who will listen. Clouds reflecting the pinks of sunrise scatter across the sky as the sun slowly rises in the east. Today thick fog on the American River is suspended in midair on both sides of the bridge, reminding me of thin strands of pink cotton candy. I watched from Fair Oaks Bridge as the mist gradually moved along the surface of the river under the bridge to its western side. 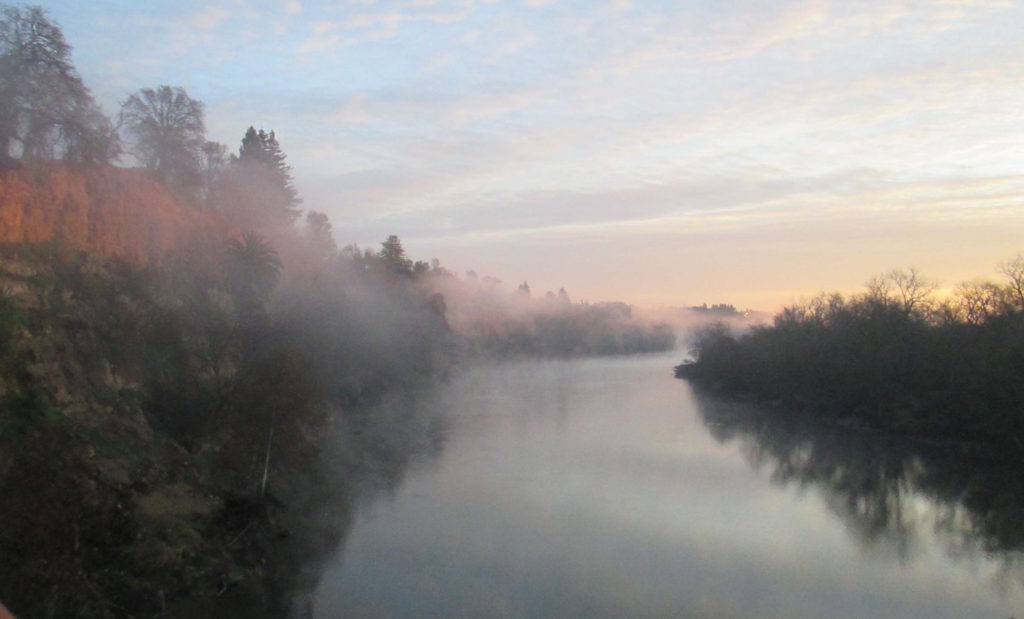 The bridge deck is solid white with frost and slippery. My shoes leave footprints on the deck. Several people dressed in jackets, gloves and hats brave the cold to walk, run and cycle. Two Canada Geese fly over in silence. One Bufflehead swims in the frigid water searching for breakfast in the river – preferring the deepest section in the center. It dives underwater and floats back up like a buoy several times over and over.

As the sun rises, the clouds scatter even farther apart, revealing a pale blue sky beneath. The sun peeks over the horizon and casts a bright light on the bridge. Ice crystals on the bridge’s side rails and deck sparkle like diamonds reflecting the sunlight.

The air is still cold! Before leaving the bridge I watch a seagull preening its feathers sitting on a tree branch bent so far down, it nearly touches the water — this is the same branch where turtles sunbathe during the summer.