An ideal day to spend at the American River after a week of scorching heat all day and evening.

I approached Jim’s crossing over the river and see no waterfowl. Not a single one! Where are they? So much has changed since the winter floods to those who visit the river regularly and see the difference.

I ride to the boat launch ramp before riding up to the Fair Oaks Bridge. Fishermen are out in their boats, hoping to catch Shad Skippers. These men are the second group of fisherman out on the river in the past couple weeks trying their luck. Kayaks are launching into the river.

Two boats are already in the water with one more to launch. The boat sits in front of a backdrop composed of Canada Geese. From a distance it appears they are floating backwards. Maybe they are as the geese roll along with the current. END_OF_DOCUMENT_TOKEN_TO_BE_REPLACED

One hundred cyclists pass me on the American River Parkway in groups of four to six all wearing cycling spandex with logos. Some casual riders pass without bicycle helmets.

Bridge is quiet and filled with spider webs and captured prey. Woodpeckers are flying through the dead tree, looking for breakfast. My first stop after crossing the bike bridge is the boat launch ramp and then Fair Oaks Bridge. Today another scorching day of least 100 degrees, so early morning is the best time to be outside.

Most of the Canada Geese (all 70 of them) wander their early morning hours at the rocky shore alongside Jim’s Bridge – the cycling/pedestrian bridge completely submerged during winter flooding. They scavenge the rocks for food and later enter the water for a leisurely swim.

Geese climb the boat ramp and beyond into the dirt searching for breakfast. Mallards fly in from the opposite shore. I watch a group of four of them glide into the water straightening their legs and using them as water skis to quickly come to a stop. I watch the action and miss the photos.

Standing close to the water, I watch the Canada Geese and ducks and can see their feet paddling along under the water. I see all of them bobbing up and down in the water as they go. Their heads move forward and back. The once tiny goslings are big now. Their characteristic black stripe is darkening on their necks.

As I stand on the boat ramp, four of the ducks are engaged in morning cleaning rituals. Three others are sleeping with their head tucked under their wing. In the distance I hear one lonely chicken call.

On a day predicted to be 104 or above, morning on the river is cool and quiet.

Lizards greet the morning with pushups. Flexing their legs. Watching me. Slinking away.

Today I enjoy the stillness of the river.  Duck rest on a distant island. Views of the river channel as seen through a spider web. Two pigeons rest on the bridge frame. Others approach the bridge, sitting for two seconds on a cement pillar. A single Canada goose honks. Cyclist headlights flash as they approach the bridge. Bikes rumble as they cross. 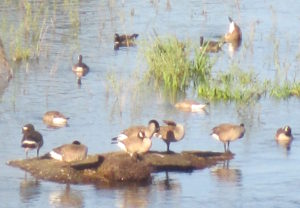 Today Canada Geese are in no hurry, relaxing in the warm sun. They swim peacefully through the river toward the boat launch ramp. Tomorrow I will bring more grapes to feed them.

The cars on the Sunrise Blvd. bridge slow to a crawl. Birds fly above my head. Cloudless sky. The hot sun melted them away.

Cool breeze refreshes my skin as I ride. I feel hot and sticky skin standing in one place. Runners, walkers, cyclists arrive early to enjoy the day before it sizzles.

My first view of the American River is watching Canada Geese glide lazily down the river on the current. Water tinted with shades of blues and greens shimmers in the morning sun.

I arrive on my bike at the boat launch ramp minutes after crossing Jim’s Bridge. No clouds visible in the deep blue sky. I throw grapes sliced in half to a duck who sees me tossing them. The duck not only refuses to eat the grapes, it complains about it with a rude quack, as if to say, “Where is the good stuff I can eat?” and waddles away. END_OF_DOCUMENT_TOKEN_TO_BE_REPLACED

The Boat launch ramp near Fair Oaks Bridge is an ideal site to watch Mallards and Canada Geese begin their mornings – eating and socializing. Are bobbing heads the way to say “Good Morning” in duck speak?

Some mornings are far busier than others. Other visitors tell me they have seen a beaver busily stripping the meat from a salmon, an otter family on a leisurely early morning swim and a wayward seal found its way up river.

I approach Fair Oaks Village hoping to hear the morning serenade of resident chickens. Not today. A few  chickens wander quietly through the street.

Arriving at Fair Oaks Bridge, I feel a slight, cool breeze. The sun already sits high into the sky throwing intense heat. The sky is filled with white, puffy clouds. Half dozen pigeons circle the bridge for their morning ritual before resting on the bridge frame overhead. In an instant, the pigeons fly to the boat launch ramp nearby. The river sparkles, yet it is empty. 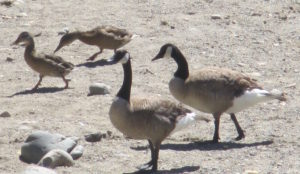 Many of the Mallards and Canada Geese scour the rocky edge of the American River at Jim’s Bridge or other points farther west. When one duck sees food thrown into the air, soon two or four at a time, they all show up to snatch a free meal.

Egrets and Great Blue Herons remain absent from the former morning stations. They have moved to where they can find food.

Spider webs stretch across the bridge vertical rails as they always do. A few walkers and cyclists pass. Today, the river at Fair Oaks Bridge is so still and clear, I can see small, round rocks sitting on the bottom. As I sit watching the water, a lone Canada Goose floats by on the water. I walk down to the boat launch ramp to get a closer look of the morning activity and see half dozen geese approach me. Canada Geese are always looking for a handout. I tear up bits of lettuce and toss them on the ramp. They sniff, take a taste and walk away. They quietly begin morning cleaning rituals, scavenge the ground for food and shortly afterwards swim away. The river is empty once again.

A crowd of Canada Geese and Mallards are sitting at the foot of the boat launch ramp this morning, engaged in their morning rituals. Ducklings swim by. More Mallards fly in, arriving with a chorus of “quack, quack, quack.” 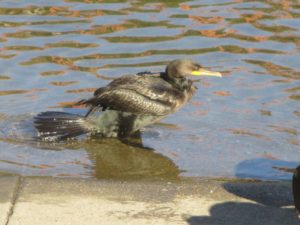 I watch carefully this morning as the ducks land in the water. They stretch out their legs at a slight angle, water ski as they touch the water for a second, then fold their legs and settle their bodies into the water. This morning I see a Cormorant with its characteristic yellow beak and huge wingspan. I have seen them now several times on my bike rides on the American River Parkway to Rossmoor Bar.

The Cormorant arrives at the boat launch ramp, ignoring all the other waterfowl. It stares out into the water, stretches its neck and spread one wing as if hanging it to dry. After a few minutes of airing its wing, I watch this new visitor to the American River walk back into the river and swim away.

Canada Geese arrive at the boat launch ramp, walking over to the ground behind the ramp, beaks down scavenging for breakfast bites. The geese always seem to be the last to come in the morning. Pigeons first, then Mallards, then the geese wake up and show themselves for breakfast.

I ride my bike to Rossmoor Bar and watch an army of ants crawl across the picnic table in view of the water. The sandbars are exposed once again and waterfowl rest on them. I sit and listen to the gentle sound of water rushing by at this place – the San Juan Rapids. I feel a cool breeze on my face. I watch the ducks swim in a small area of shallow water as geese stand guard on the sandbars.

Today, the river is relatively quiet. I rarely see rafters or kayakers. The snow in the Sierra has yet to melt and run down river. Will this area rage with floods again in the fall? 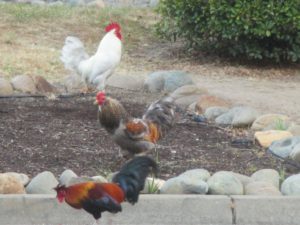 I begin the day by listening to the chicken’s morning calls in Fair Oaks Village. I stop and enjoy their morning concert.

Today a pale blue, cloudless sky is tinged with gray at the horizon. A gentle breeze blows on Fair Oaks Bridge as sunlight glares on the water. I meet a couple looking over the side of the bridge and ask what they are looking at. They are looking for the beaver that was eating a salmon whole by stripping the meat right off the bones. They showed me where to look on the shoreline to find its home. I also found out they sighted two river otters and a seal that wandered far from its home turf into the American River one day. END_OF_DOCUMENT_TOKEN_TO_BE_REPLACED