Cool enough outside, I wear long sleeves. I cannot imagine cooler days. Seems that it has been so hot for so long! A few random chicken calls this morning in Fair Oaks Village. The chicken family on Bridge Street are always on patrol for food and scratching the dirt. Only two young chicks survived and they look more like little chickens instead of fluffy chicks now.  The gray bunny comes out early in the morning and dusk when fewer people are around to bother it. I remember during one of my bridge visits, the rabbit was startled when I saw two careless hikers stumble and fall down the Fair Oaks Bluff trail, nearly flattening the rabbit. 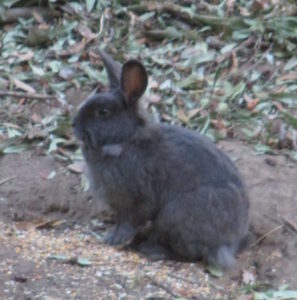 Mornings are quiet here during the past few weeks. River is low and at peace. I have stood on the bridge deck many mornings. Some days are about the pure experience of being here – feeling the sense of peace, joy and escape. I enjoy the warm morning sun on my face. I have no new stories to tell or photos to share.

Four pigeons land on the Truss frame for moments at a time before they fly away. A lone boater floats upriver. Many people sit in fishing boats and stand on Jim’s Bridge. No idea what they are catching. Far too early for salmon to be swimming home yet. 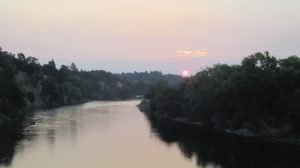 Finally, morning clouds! Scattered wisps of clouds drape the sky in a panorama encircling Fair Oaks Bridge. The sky reminds me of an artist looking at the canvas and thinking, “This deep blue sky is too empty. It needs a few wisps here and there.” 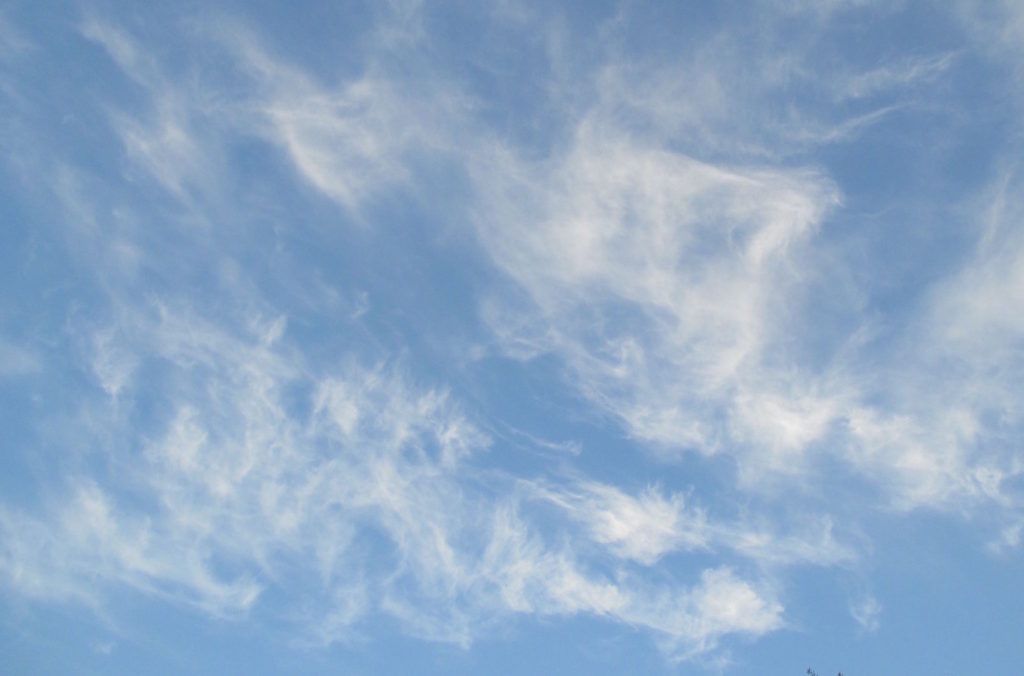 Water is still, not even a ripple. A cool breeze blows across my face. With a moist chill in the air, I wear my denim jacket and blue jeans. Several groups of runners – from two to twenty – cross the bridge engaged in conversation. Single cyclists pass by. I hear honks from Canada Geese in the distance. Eight fly over in V formation and continue flying east. I hear one quack from a duck still hiding somewhere along the riverbank. I hear a bird sing its “calliope” song. A few pigeons sit on the truss frame and fly to shift positions. No boats today. No wildlife at play.

Fallen leaves lay still in the water underneath the bridge. The water reflects a mirror image of the clouds and riverbanks on both sides. The river, usually a blend of greens and blues, is solidly blue this morning as it reflects clouds and the deep blue sky.

Mornings are quiet in recent weeks as one season folds into the next. The days of warm summer mornings are passing. Autumn chill is on its way. Leaves with the vibrant colors of deep orange, fiery red and mild yellows falling gracefully into the river is soon to follow. 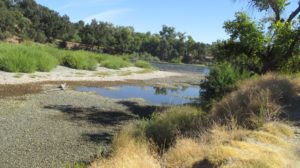 As we moved farther into September, we are getting close to the arrival of our fall run of Chinook Salmon.

The river runs especially low as the weir is being installed in the river at the Nimbus Fish Hatchery. The normally shallow area, I have often described as “the narrows” in previous blogs, is more rocks than water today. The rocky area pictured is a short walk from Fair Oaks Bridge.

How things will change in a month! Salmon will be swimming upriver to spawn, jumping and splashing through the narrow area.

Visitors are likely to  see a dozen salmon swim through in less than an hour. Seagulls, Turkey Vultures, Egrets, Great Blue Herons, Canada Geese, Cormorants and ducks will all be watching for their turn to enjoy a salmon lunch or dinner.

I continue my bike ride on the Parkway until I reach the long paved path that veers off the bike trail and ends at the river. The island pictured attracts 100 seagulls and a dozen Turkey Vultures during the peak of salmon spawning. 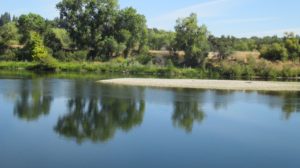 I have often seen people wandering on the other side of the river with no idea how they get there. I recently walked with a Meetup group to Sailor’s Bar. For the first time, I saw the river from the other side. Sailor’s Bar is another  beautiful series of easy walks around a large pond with access to the river. 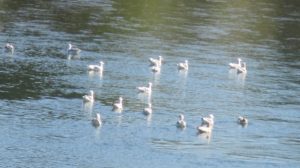 Twenty seagulls are already waiting anxiously for salmon to arrive. For now, they float lazily on the water. Some fly to change their position. Turkey vultures patrol the island. I see these large birds flying across the sky and settling in trees on every walk along the river.

As I walk down Bridge Street toward the Fair Oaks Bridge entrance, I see the resident rooster and mother hen standing in front of an entry gate at the end of a long driveway leading to an elaborate home on the hill. The rooster and the hen pace in front of the gate and look in as if they are waiting for the owner to come down, open the gate and welcome them in.

Bright sun casts dark shadows in the water. Sky above the bridge is graced with more clouds today. Sloping hillsides of Fair Oaks Bluff and clouds are reflected as mirrors in the clear, still water.

As I stand on the bridge, five Canada Geese arrive from the east in V formation, honking and honking and land without a splash in the river. Two geese fly farther and then circle around to land alongside the others. No spider webs on the bridge today. Usually a dozen webs cover the side rails. Today there are none. No fishermen are sitting in boats. They may be waiting for salmon to arrive. 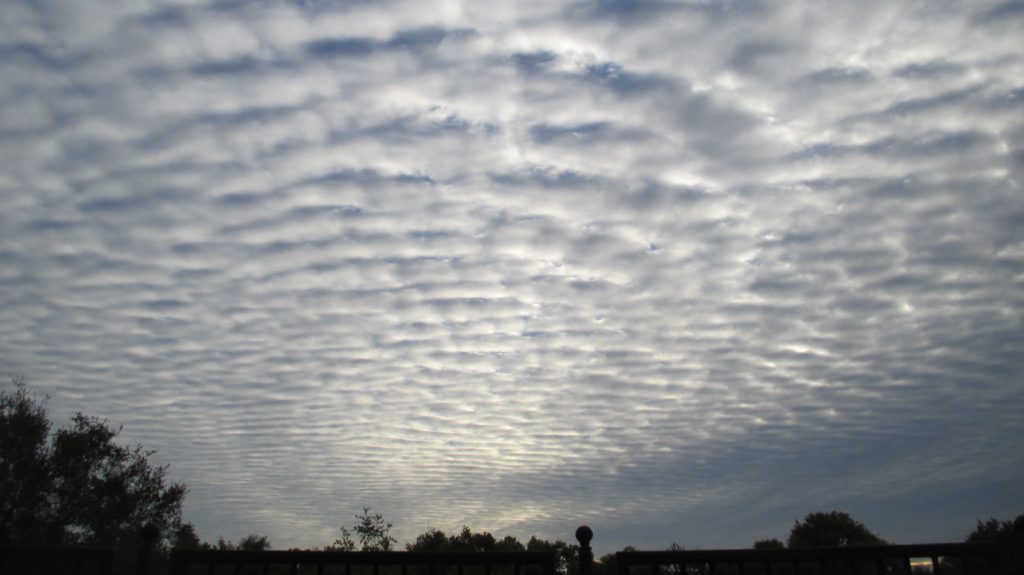 I enjoy watching their movements and stand in awe of so many shapes: wisps, fans, woven baskets and blankets. Some cloud formations resemble spun sugar or cotton batting stretched so far that deep blue sky peeks though. White puffy clouds have covered the sky, moving with the winds and changing shape all week. With so much cloud cover this morning, all I see is clouds in every  direction.

The American River remains very quiet at Fair Oaks Bridge. Water level is low. Few waterfowl or birds are here. When they arrive, no one stays for long. Have not seen a Bufflehead diving in the middle of the river corridor since early this year. I miss the duck squabbles and persistent quacks. Few geese arrive and they don’t stay long. They too may be waiting for the salmon to arrive in a few weeks. Or maybe everyone is staying warm a little longer in their evening hiding places.

A collection of sights from morning and afternoon bike rides along the American River Parkway last week.

Taking photos and writing observations about my morning visits to Fair Oaks Bridge began as a fun way to capture my experience. It was several weeks later before I thought of posting them as blogs. Two years later, I am still posting my observations, enjoying regular visits, and a full color book featuring a selection of first person narratives and photography      is ready to print.

During that September as today, fishermen are sitting in their boats waiting for salmon. Although it is very early in the season, 11 boats line the American River all the way around the bend. When I asked one of the fishermen in a boat close to the bridge, if salmon were in the river, he said, “A few.” Anxious fishermen face a lot of competition to catch a few fish. River level remains low. 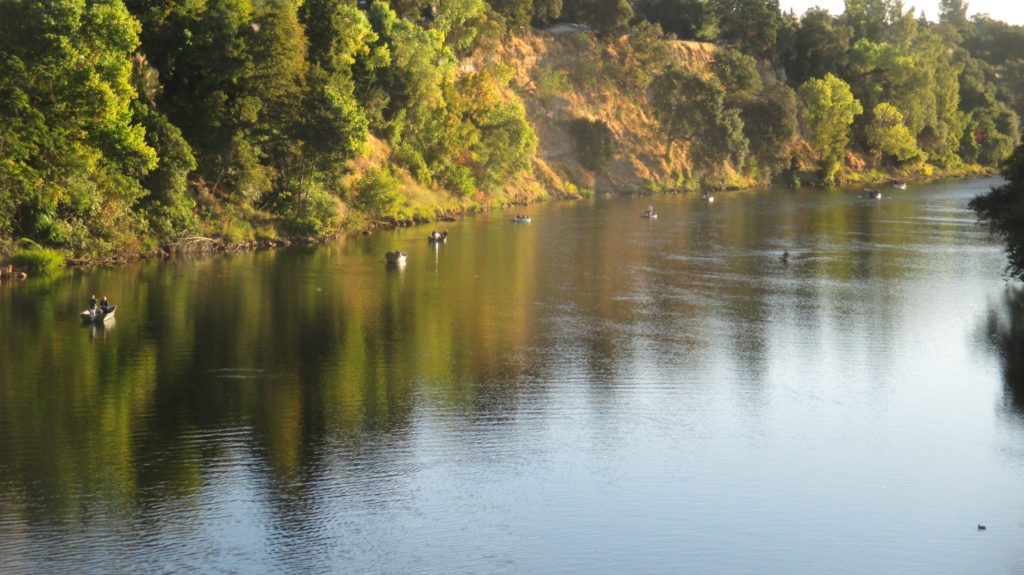 Arriving long after sunrise, the blinding yellow sun is sitting just above the trees behind the boat launch ramp (outside the photo on right). A few thin strips of white clouds do nothing to hide the sun’s harsh light. A slight breeze blows against my skin. What I notice immediately is thousands of tiny insects swarming on the outside of the bridge side rails. Their swarm stretches at least one-third the length of the bridge. Floating through the air, they look like tiny feathers released from a pillow or quilt and being shaken into the air. 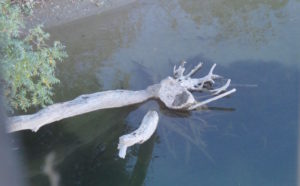 I see “The Wild Man” still lies where he fell after being knocked over by the floodwaters in early 2017.

I walk down to the boat launch ramp in time to see one duck splashing itself with water, other engaging in regular morning ritual of cleaning feathers. 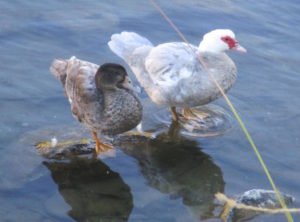 Two others stand on rocks and watch. Looking across the river, I see an Egret on the opposite riverbank in its usual spot. About 50 yards to the west sits the Great Blue Heron. They always do their best to avoid each other. As I watch the Heron, I see a squirrel behind it, dash up a small hill on the Fair Oaks Bluff. Squirrels are one animal I never see on the riverbanks.

When I cross Fair Oaks Bridge much later in the morning, more people are out walking, with their dogs and others are cycling. A tiny bird is singing good morning. Ti Too! Ti Too! Four pigeons tuck their heads under one wing as they perch on the highest cross beam of the bridge. 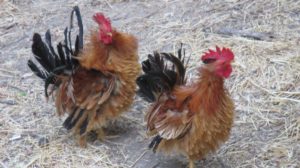 Walking on Fair Oaks Bridge, clouds blanket the sky and the only light is a long, thin strip directly above distant treetops. River is calm and deep green.

Lots of activity this morning! Standing on the bridge, I watch clouds change from a gray blanket to snow white puffs, as the wind stretches them apart to reveal a deep blue backing underneath. Three ducks come out for a swim and approach where the boats sit.

As I prepared to take photos of the morning scene, I was surprised to see clouds reflecting in the water – seen only through my camera lens. 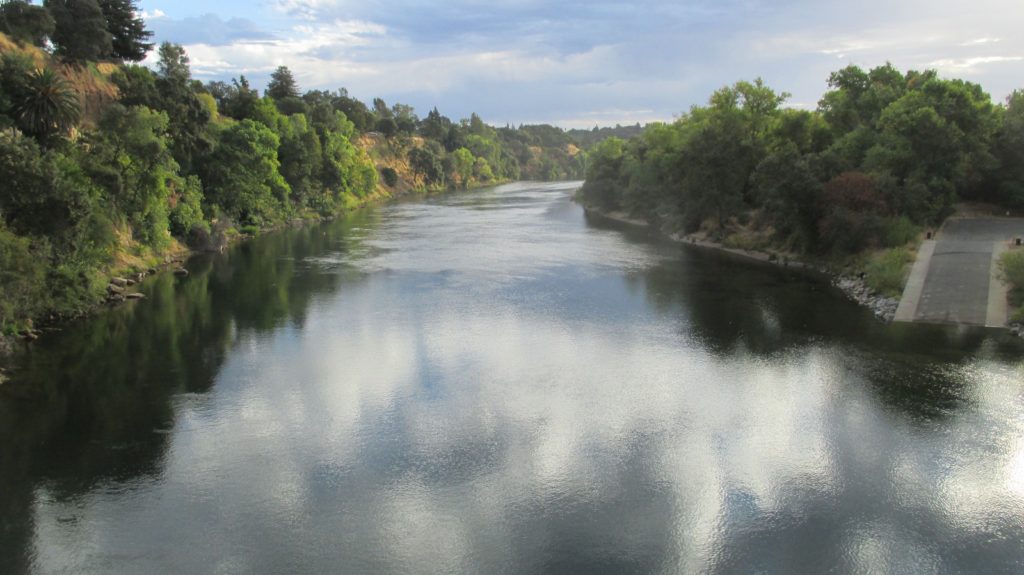 Walking to the boat launch ramp, rafters and boaters who arrived as early as 530 am prepare to leave the river while others are just now arriving. Pick up trucks and boat trailers line the parking lot. Several ducks next to the riverbank engage in their morning routines: cleaning, dunking for food, and watching the river. Turkey Vultures patrol the sky over Fair Oaks Bluff. Two-dozen pigeons circle the sky east of Fair Oaks Bridge. I do not see any of them land. They circle and vanish. 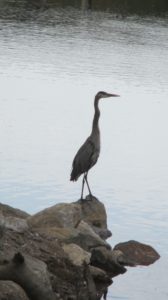 I hear a chortle to my left and know a Great Blue Heron has flown in. It poses on the rock on the left side of the boat ramp long enough for me to snap a few photos. Then it sounds another call, extends its large wings and glides slowly over the river, past the ducks and vanishes further upriver.